American Independence Day is not the only significant event going on for this month. July is also the month of one superfood that has been a common ingredient in your dessert and appetizers—blueberries!

Whether it is in a salad, pie, or muffin, you can never go wrong with blueberries. Aside from its delectable taste, the tiny berry is packing a bunch of healthful nutrients under its belt.

Relatively new fruit in town, they might not be as famous as their red counterparts, but they are as healthy as they are delicious.

Phytochemical research made on blueberries reveals the plethora of bioactive substances they have. They are chock full of antioxidants, fiber, and vitamins that are great for preserving your health and shape, thus allowing them to help maintain the health of seniors over the age of 50.

With their various age-busting benefits, who would not want a taste of this blue and purple berry every day? Whether you are at home or an assisted care living facility near me, make sure to include this fantastic fruit into your next baking session.

Here are some of the nutritional highlights of this wholesome and widely popular fruit.

The adage “with age comes wisdom” is valid to all extents. However, age also comes with mental and cognitive performance decline.

Although it is a normal phenomenon, there are a variety of ways to reduce and prevent its occurrence, and one of them is eating a cup of blueberries every day.

According to research, consistent blueberry supplementation helps improve the memory and brain activity of older adults.

Blueberries contain anthocyanin —a substance giving it its purplish-blue color— that enhances neuronal signaling and induces neuroprotective function within the brain. Anthocyanins target your brain’s hippocampus and neocortex, which are regions substantial to your cognitive health.

Blueberries are also packed with flavonoids. These chemicals are responsible for delaying neurodegenerative illnesses such as dementia and Parkinson’s disease.

Aside from brain benefits, the blue beauties also do wonders for your bones, particularly in the weak bony processes that come with being a senior,

Blueberries contain bone-essential nutrients such as:

Calcium and magnesium are substantial elements in maintaining the bone structure’s strength. Additionally, iron and vitamin K keep the elasticity of joints and cartilage to their optimal condition.

Vitamin K is also a vital nutrient responsible for enhancing the body’s calcium intake. A deficiency in it will cause low calcium resorption, thus increasing the risk of bone fracture and other bone-related health conditions.

Diabetes is a severe disease prevalent in older adults. It is a condition where the body does not produce or use insulin efficiently to lower the glucose levels in the bloodstream. When this happens, glucose will remain in the blood, causing severe health damage over time.

Fortunately, diabetes is a manageable disease when paired with a healthy diet and lifestyle. One superfood that can help you prevent or control your blood sugar from rising is blueberries.

The anthocyanins appear to have anti-diabetic properties seen by influencing insulin sensitivity and glucose metabolism.

This means that the anthocyanins help the body use insulin effectively, increasing our sensitivity to it, thus preventing seniors from developing type 2 diabetes in the future.

Blueberries also contain way less sugar than most fruits. One cup full of the bluish fruit contains sugar equivalent to a small apple or a large orange.

Eating low calorie yet nutrient-rich foods such as blueberries lowers your risk of contracting cardiovascular problems in the future. It also contains various nutrients that help prevent heart disease, such as:

The berry itself has a paltry amount of cholesterol content compared to other fruits. Its fiber constituent also helps the body reduce its blood cholesterol levels, thus preventing cholesterol and heart problems.

Another nutritional highlight is the folate and vitamin B6 it carries. These nutrients are responsible for preventing homocysteine buildup, which increases the likelihood of contracting CVD. 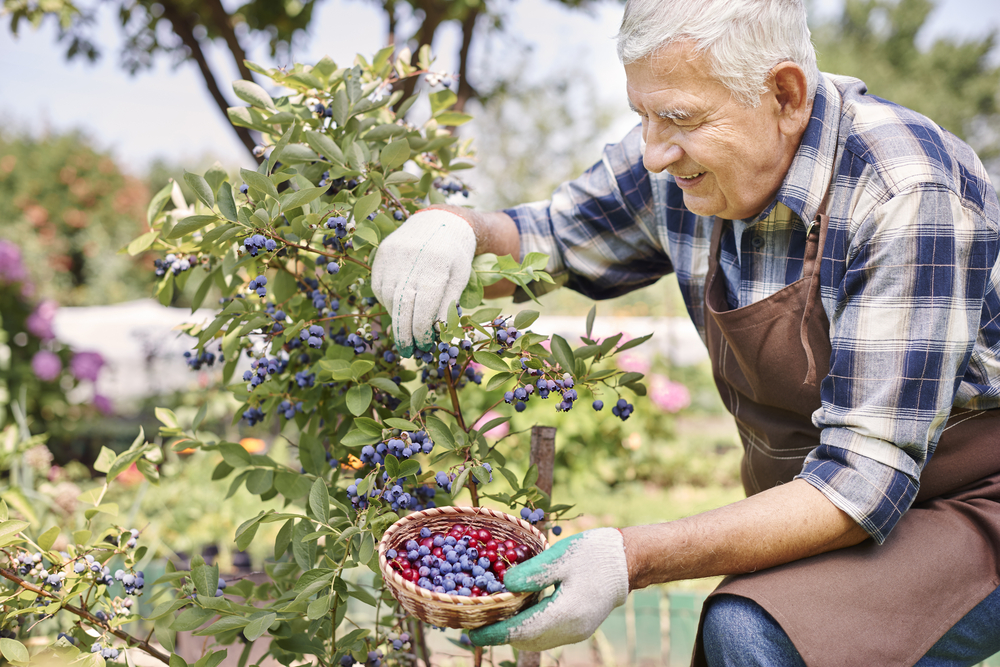 A balanced diet high in antioxidants improves the health of older adults and ensures that they age gracefully.

Antioxidants are notorious for hunting down free radicals in your body. Free radicals are unstable molecules that come from air pollutants, hazardous chemicals, cigarette smoking, and nutrient-poor meals.

These dangerous molecules scavenge the body for electrons, damaging your DNA and healthy cells in the process. They are also the most common cause of aging and the development of fatal diseases such as cancer.

Luckily, blueberries are one of the few fruits that are rich in flavonoids—a kind of polyphenol antioxidant. They induce a lot of positive effects on your body, such as:

Many seniors dread aging because of its irreversible effects, such as loose and wrinkled skin. This happens because as the body ages, the proteins known elastin and collagen also decrease in number. These two substances are responsible for the skin’s elasticity and structure.

Before it is too late, fill your snacks and meals with blueberries. These tiny fruits are rich in vitamin C—an essential nutrient needed for collagen formation.

Collagen will then do its job by protecting your skin, enhancing its texture and keeping its health. One cup of blueberries contains 24% vitamin C, which is already enough to sustain your daily recommended needs.

Aging does not have to be dreadful. There are plenty of ways to ensure that seniors age healthily. One particular road to take is to eat a healthy diet by adding blueberries into the mix. Whip it up with your morning pancakes or blend it with your afternoon smoothie for a healthy change.